“Be passionate about what you love,” she emphasized. “You won’t get rich, but there are other rewards.” 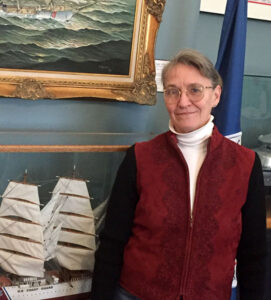 Danvers – Joan Whitlow’s interest in people and their cultures inspired her to study anthropology in college, and four decades later, as executive director of the Custom House Maritime Museum in Newburyport, that curiosity still burns brightly as she works with the artifacts of earlier days.

“I like objects–-the historic and intrinsic nature of them,” remarked the sixty-year-old Danvers resident. “And I love the stories behind the objects. They represent the continuum of life.”

Whitlow joined the small Newburyport museum in September 2019 after a long career at other institutions–-including 20 years as registrar and collections manager at the MIT Museum in Cambridge, and over 10 years as a collections manager at the Peabody Essex Museum in Salem. Along the way, she earned a master’s degree in museum studies from the University of Leicester in England. A Washington D.C. native, her interest in historical objects was forged early through frequent visits to the Smithsonian Institution, now the world’s largest museum, education, and research complex, with over 155 million objects and specimens.

“What I like about the museum profession is that it’s a creative environment, where curiosity is valued. It’s active, and every day is different,” she observed. “I wouldn’t do well sitting in a cubicle and doing the same thing every day. It’s ideal for lifelong learners.”

At the Custom House, which is dedicated to the maritime history of Newburyport and the Merrimack River Valley, Whitlow, one of only five staff members, has a diversity of duties, which she enjoys, along with the freedom to come up with new solutions to the organization’s challenges. She does everything from facilities and collections management to fund raising and marketing, and is very hands-on, even pitching in to help paint a gallery that she felt needed refreshing.

“The Custom House Maritime Museum has the opportunity to attract new audiences and really showcase Newburyport maritime history with engaging programs and exhibitions,” Whitlow emphasized. “Besides being a destination in a destination town, it also has the potential to become a museum for researchers, given the breadth and uniqueness of its collections. I want people to come to see objects that only can be found at the Custom House.”

“The building itself,” which was constructed in 1835 to facilitate growing overseas trade and tax collection of imported goods on the waterfront, “is our largest artifact,” she noted. A Greek Revival style granite building overlooking the Merrimack River, the Custom House is on the National Register of Historic Places. Other goals Whitlow has include increasing the membership base, which provides additional financial support beyond admissions fees, and collaborating more with other area non-profits.

“The nonprofit world, unlike the private sector, is very open to sharing ideas and information,” she said.

When asked what was most difficult about her job, Whitlow observed, “It’s a never-ending position–-which makes it hard to prioritize at times and stay focused.” She paused, and then struck a philosophical note about the balance between the paperwork museum collections require and appreciating the objects themselves that are being curated. “The paper trail exists so someone in the future has a road map of what you did; it’s the byproduct of the work, not the work itself.”

A strong believer in work-life balance, Whitlow pursues a variety of interests outside of the museum, including ceramics, gardening, renovation of her house, travel, and cooking. She also volunteers as a board trustee for the Danvers Historical Society.

She had this advice for anyone interested in the museum field as a profession.

“Be passionate about what you love,” she emphasized. “You won’t get rich, but there are other rewards.”