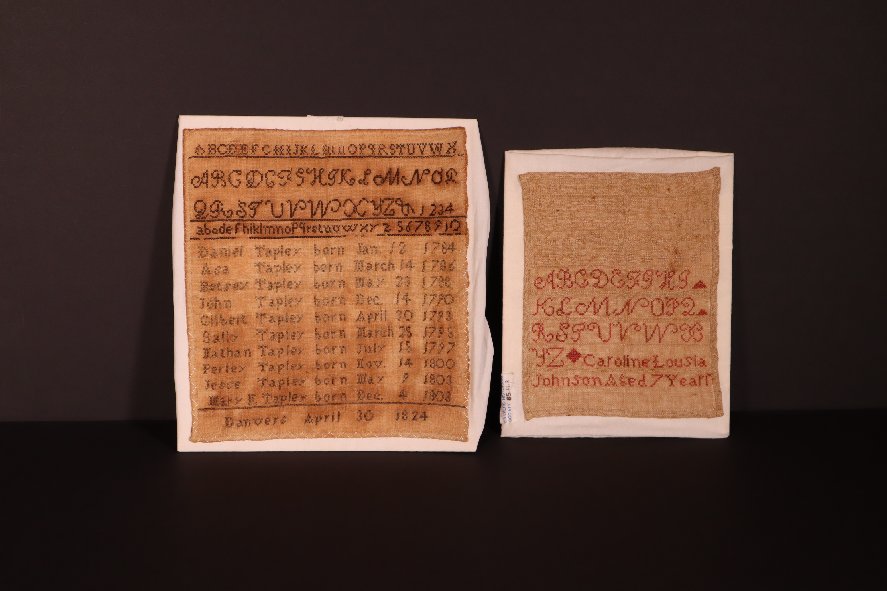 Samplers by Tapley and Johnson

These two samplers were made by young girls living in Danvers. Mary Tapley finished hers on April 30, 1824. She made a list of the birthdays of her brothers and sisters as well as her birthday. Caroline Louisa Johnson made her sampler when she was 7 years old, but we don’t know what year she made it.
A sampler is a piece of cloth with sewing and embroidery stitches. The earliest samplers were created in Europe in the 16th century by professional needle workers. The samplers were a way to sew their favorite stitches and patterns for later use.
By the 17th century young girls usually five or six years old were taught to learn to make a Marking Sampler. They practiced their stitches to make letters of the alphabet or numbers and maybe a few geometric shapes. When the girls were older, they learned to stitch verses from a poem or create simple scenes with animals, trees, flowers and even people. A Marking Sampler was important because as a homemaker, you needed to stitch numbers on all your linens to keep track of them.